Five is the magic number for John Pye, as the UK’s largest auction house network has been crowned Asset Valuer & Auctioneer of the Year for the fifth year running at the Turnaround, Restructuring & Insolvency (TRI) Awards.

John Pye, which was established more than 50 years ago, had already set industry records by being the first firm to win the prestigious prize three times in 2017 and winning for the fourth time in 2018.

Adam Pye, Managing Director of John Pye said: “To have set another winning record is a huge honour for myself and the team; we’re absolutely over the moon.”

The firm was also a finalist for three other awards at the ceremony, which was held at the Hilton London Bankside. More than 500 of the sector’s top businesses attended the event.

Adam continued: “The awards represent an industry benchmark. We’re absolutely delighted to have been recognised by our industry for the work we do, as we continue to innovate, diversify and adapt to the changing markets in which we operate.

“We’ve had a really fantastic year. We’ve designed and developed an in-house valuation app to assist clients with asset valuation requests, established new departments within the business which will significantly grow our offering and we have worked with some of the UK’s biggest businesses to valuate stock, intellectual property and tangible property within a matter of hours of our instruction.

“Next year is set to be even better and I’d like to thank our 510 staff for their hard work in getting us to where we are today.”

The judges commended the scale of assignments and the speed of John Pye’s work. The team also demonstrated a solid multi-asset offering, with the combined work of its property, and valuation divisions noted as being highly effective and efficient. 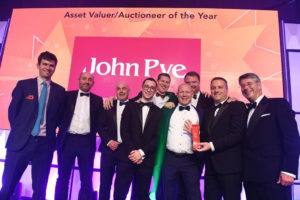