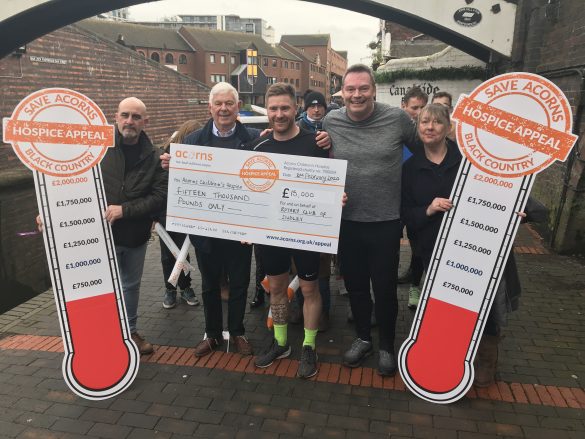 Earlier this month, 40 year old James Wright from Wolverhampton attempted a gruelling 145 mile run along the Grand Union Canal in aid of Acorns Children’s Hospice but was cut short after 90 miles due to a broken-down support vehicle.

On February 2nd (Sunday), James set off at 5am to complete the unfinished final 55 miles of his canal-side challenge, ending with a triumphant finish in front of friends, family and supporters at Birmingham’s Gas Street Basin at 3pm.

James is fundraising for the £2 million Save Acorns Black Country Hospice Appeal and thanks to an incredible pledge of £15,000 from Dudley Rotary Club and James’s Just Giving page has helped the Appeal reach an incredible £600,000 in just six months.

Acorns Chief Executive, Toby Porter praised the fundraiser’s never-say-die attitude. He said: “We’re in awe of James, not just for his incredible feats of endurance, but the astonishing amount he’s contributed towards our Appeal. When James gets an idea in his head there’s no stopping him. It was an honour to run alongside him for the final stretch.

“Our sincere thanks also to the phenomenal support of Dudley Rotary Club. They are a shining example of just one of the numerous Black Country groups, individuals and organisations who have been supporting Acorns and the children and families we serve in such an extraordinary way since we launched this Appeal.”

“£600,000 is wonderful in such a short space of time. We still have a long way to go, so I would say to our local communities – please keep on donating in the amazing ways you have been, and help us reach our goal for every child who needs us.”

James, who is head professional golfer at Penn Golf Club, Wolverhampton, has a very personal connection to Acorns. As well as two children of their own, James and his partner Gemma foster children – one of whom used Acorns services.

He says: “It’s a hospice Gemma and I know very well. A child very close to our hearts used this amazing service and we know first-hand what Acorns provides.

“For the families – many with nowhere else to turn – Acorns is a lifeline. Without it they’d be lost. The challenges they’d face along life’s journey would be intense, and in some cases too much to cope with.”

James added: “We are fortunate to have a charity like Acorns in our community – its wonderful staff and amazing facilities creating precious moments for families to treasure every day and the support to help them keep going, through the good times and bad.”

The Save Acorns Black Country Hospice Appeal was launched by Acorns last July as the proposed closure of its hospice in Walsall was put on hold following pledges of additional NHS support, that should ensure the hospice is adequately funded from 2023/24 onwards.

The urgent call for donations has seen the local community mobilise into action, with numerous individuals, celebrities, businesses and sports teams all stepping-up to support the charity.