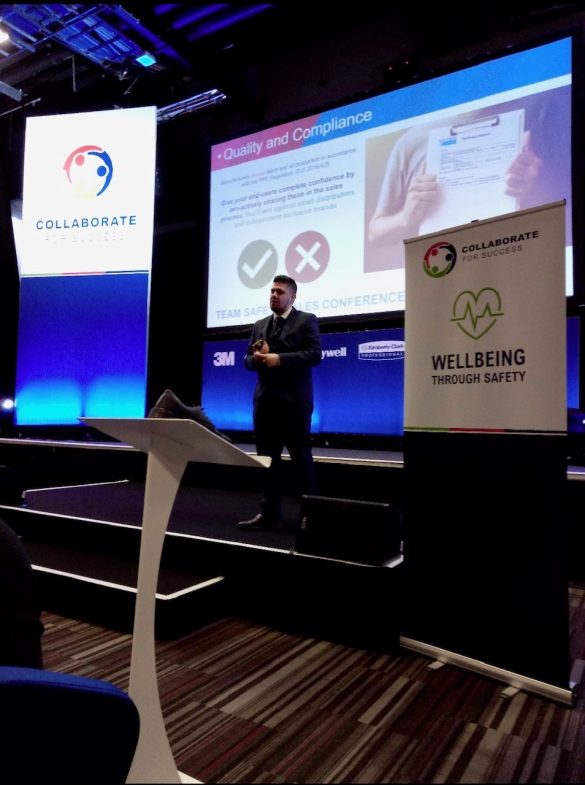 The second-generation family owned Safety Boot manufacturer has a reputation for being the go-to supplier for Safety Equipment Distributors looking for a single source solution. The company which operates from one secure site based on Wimsey Way in Alfreton has a range of over 85 styles designed for various industries ranging from sizes as small as a size 2 all the way to a size 16. They sell their range via distributors all over the world.

Like in most industries, their larger customers have yearly sales conferences to engage with key suppliers and plan the year ahead.

The first one of the year took place on the 9th – 10th January at the Ricoh Arena in Coventry. After a successful two days the company was voted by attendees as supplier of the day. Other suppliers in the running included household names like 3M, SC Johnson Professional, Kimberley Clark and Honeywell.

Voters’ feedback cited their exceptional engagement and valuable presentation session, which focused on the importance Safety Footwear can play preventing undiagnosed foot problems like chronic aches and pains, given wearers are often on their feet for the whole working day.

Other conversations during the day included planning a widespread campaign to promote a large range of new styles featuring the Boa® Fit System, as well as increasing customer awareness of a national foot scanning service aimed at improving Health and Wellbeing at work.

The evening of 9th January saw a celebration that brought together around 300 people from the Safety Equipment industry to recognise the achievements of the previous year, the awards were widespread throughout the organisation and it showed how significant the contributions were across the whole business. Magicians and live performances gave a party atmosphere to an already incredibly positive evening.

Speaking about the event the Rock Fall Senior Management Team said: “These customer conferences represent great value for all involved, it’s a superb opportunity to network and plan with literally hundreds of familiar faces and introduce new team members to the Rock Fall brand. It’s our 6th year supporting this customer at their yearly event and they get better every year. We put a lot of time and resource into planning this year’s event and we are all elated to have been recognised as supplier of the day, a much sought-after title. We were optimistic ahead of the event, but it has surpassed all our expectations and actions from the day are already underway, with some great results already.”

Gillotts praises community groups as it hands out…