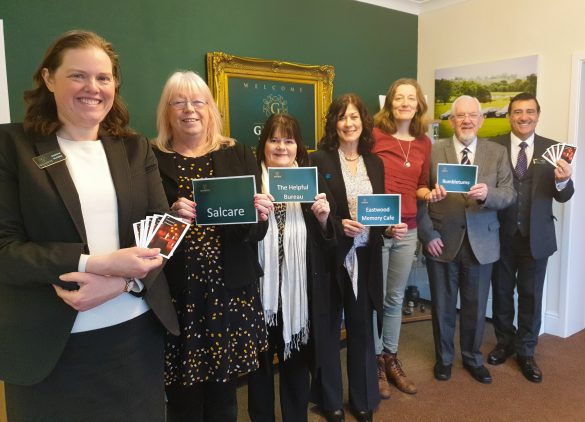 A project to help victims of domestic violence and a community café were among five good causes to be given a boost when a Nottinghamshire funeral firm handed out the proceeds of its annual fundraiser.

Gillotts Funeral Directors, based in Eastwood, has donated an equal share of £2,500 to each of five different local charities after it raised the money through its Christmas appeal last month.

The charities serve the community in the five towns where Gillotts owns and operates offices, in Eastwood, Kimberley, Selston, Stapleford and Heanor, across the border in Derbyshire.

The charities are The Memory Café, which supports patients with dementia and their carers in Eastwood; Rumbletums, a community café and supported training project for young people with a learning disability in Kimberley; The Helpful Bureau, which provides assisted living services to old people in Stapleford; Selston Sunshiners, an over-50s social group in Selston and Salcare, a one-stop-shop which provides a range of support services for vulnerable people and families in Heanor.

Gillotts raised the money by donating £1 every time a visitor left a message of remembrance on any of the five Christmas trees erected in the reception of each of its offices last month.

Joanne Hutsby, a Partner in Gillotts, said: “Our Christmas fundraiser was very successful once again, but there was extra interest this year once visitors heard we’d chosen to help five extremely worthy local causes.

“We understand how important their work is but how challenging it is for them to raise the funds they need, which is why we’re extremely happy to have raised such a large amount of money and be able to pass it on for them to put to good use.”

Derek Gardiner, Chairman of Rumbletums, which is based in Victoria Street, Kimberley, said that its £500 share has already been allocated to its building fund and will help it to expand the café’s kitchen.

He said: “We give young people with learning disabilities the opportunity to learn new skills and develop their self-confidence by working in our café, but our current kitchen is very small and limits the scope of work that we can do.

“We’re really grateful to Gillotts for their donation, which will help us to extend it so that we can add more services for our young people and also increase our offering to our customers.”

Gillotts praises community groups as it hands out…